Q. One primary objection to the Expanding Earth theory is the inability to find an actual increase of Earth's radius by modern measurements. How do you explain this?

A. Some people certainly claim that scientists have proven the Earth is not expanding using space geodesy measurements. The study most often mentioned is a relatively recent study, published in 2011 by a group of scientists led by Xiaoping Wu, who used space geodesy data from nearly the last 30 years to estimate any change in the shape and size of the Earth over that time.1,2 They interpreted the data to mean that the Earth has remained the same size for almost the last 30 years and this is often reported as undeniable evidence against expansion by opponents of the Expanding Earth theory.3 However, anyone who has studied the evidence in any detail will quickly note several obvious problems with these assertions of no Earth expansion.
Firstly, the reality is there was another major study of the space geodesy data published in 2011 that did indicate the Earth is increasing in diameter slightly.4 The team of scientists, led by Professor Shen, noted their study “clearly demonstrates that the Earth has been expanding, at least over the recent decades”. Yet this study is never mentioned by opponents of the Expanding Earth theory.
Secondly, in practice there have been many attempts over the years to calculate if the Earth is expanding, contracting or remaining constant and several of these studies have also indicated expansion. Once again, it is very noticeable that opponents of the Expanding Earth theory choose to only mention scientific studies agreeing with their preconceived idea that the Earth is constant and unchanging, while completely ignoring the many other studies on the subject which specifically discuss the space geodesy data in great detail and come to different conclusions.
Here is a list of some of the main studies I know about:

Thirdly, we must wonder what to make of all these different space geodesy results. It's simple for anyone who believes that the Earth is a constant diameter. All the studies that indicate expansion are wrong and can simply be corrected to what they know to be true. There is no further thought required. However, if you take the more scientific view that the Earth may be expanding or contracting the problem is more complicated and we must wonder why we getting all these differing results. Look at the results given in the table above. Why are they all so different?
Well, the main problem seems to be that the data isn’t as clear as many people believe. I explained this problem in more detail in my book (see page 108 to 110). If you discuss the data with some of the scientists who have published their interpretation of the data they will readily tell you that they have “removed some of the data because they thought it was unreliable”. Just think about that statement and what it means for a moment.
Other authors have emphasised that in some studies 23 of the 59 stations in the VBLI database were removed apparently to preserve the status quo of a constant radius Earth.5 The belief in the Constant Diameter Earth is so strong some scientists argue it is acceptable to choose which data to use.
The Australian geologist James Maxlow also discussed this problem in detail in his books Terra Non Firma Earth and On the Origin of Continents and Oceans.6,9 Early results from VLBI had an average vertical motion of 18 mm per year but because scientists expected that most VLBI stations will have up-down motions of “only a few mm/year” they recommended that the vertical motion be “restricted to zero, because this is closer to the true situation than an average motion of 18 mm/year”.

James Maxlow also goes on to explain how this elimination of any increase in diameter has manifested itself in large periodic adjustments in charts of the published data.

NASA publishers some of their data so we can actually look at some raw data on their Global Positioning System (GPS) web page to check James Maxlow’s argument for ourselves.7 From this web page you can click on a number of different data stations using the table or the map to see a graph of the data plotted over several years. You can see the movements clearly here, and these charts are often used to justify a fixed earth radius. However, when you take a serious look at the Cartesian Positions and Velocities, you will note that they not only have an X/Y scale, but also a Z for elevation increase/decrease. If you click on PERT in the table for instance you can see that the vertical height GPS results from near Perth jumps several times over the years. The graph shows a red line running through the vertical data to show were the changes occurred.

What are these vertical corrections in the GPS data set on the NASA site? It looks like Perth should have experienced major earthquakes sometime around 1995, 2001, 2008 and 2012 judging by this GPS data. The most major change is a few cm in 2001 and there is also a gradual downward drift in the data. But as James Maxlow noted in his book, Perth has not experienced any earthquakes during this period. It certainly seems to me that the published data supports James Maxlow’s argument that the raw data is being periodically adjusted to conform to a Constant Diameter Earth assumption.

Finaly, the space geodesy data for the measurements only span the last 30 years, so it cannot indicate if expansion was happening before this. Even the paper by Wu et al notes this limitation with the phase "…the Earth is not getting larger at present, within current measurement uncertainties". The “at present” is a major limitation of every space geodesy study. On the other hand, the geological evidence for expansion is usually based on geological data spanning hundreds of millions of years. Palaeographic reconstructions for example use 5 million year isoage increments up to 200 million years ago and indicate a gradual expansion over the entire time period.

This geological evidence for expansion also gives no indication if expansion varies at all between these 5 million year measurements. In practice most geological processes are intermittent so it seems likely that there may also be variations in the rate of expansion. In fact, Klaus Vogel, one of the best known palaeographic reconstructionists of the Expanding Earth, has been suggesting for a number of years that the expansion rate may vary over a short timescale.8 It is plausible that there has been little expansion over the last 30 years simply because expansion is presently at a minimum. So the claim that space geodesy data can be used to ignore geological evidence for Earth expansion over millions of years is evidently wrong. This must be one of the biggest and most noticeable errors anyone can make.

Just to give you an idea of the massive difference in timescale between the geological data and the space geodesy data, consider a more familiar example based on an equivalent relative timescale. We could measure the growth of a child from birth to 20 years old every nine months and plot the results. Alternatively, we could take measurements in less than a tenth of a second and attempt to estimate the total growth from this tiny time period. Which result would you choose to believe?

Professor Shen, noted their study “clearly demonstrates that the Earth has been expanding, at least over the recent decades”
...this elimination of any increase in diameter has manifested itself in large periodic adjustments in charts of the published data. 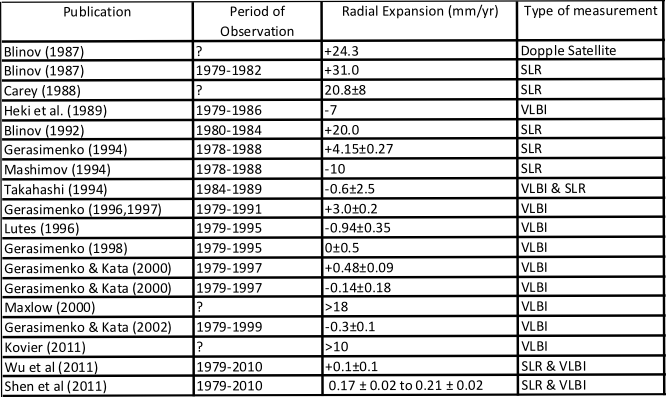