A team of scientists have just presented evidence that our planet was struck by a massive comet over 100 km (62 miles) in diameter at the end of the last Ice Age, roughly 12,800 years ago. This gigantic comet would have added about 3.14 x 1014 tonne to the mass of the Earth: equivalent to the mass increase required for about 18.5 years of Earth expansion. 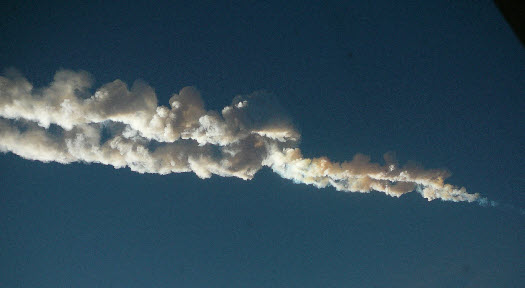 The dust trail left by the much smaller 20-metre exploding Chelyabinsk meteor in 2013. © Nikita Plekhanov

The team’s study shows the Earth was just emerging from the end of the last Ice Age when dust from the impact and massive wildfires plunged the Earth back into a short glacial period, devastating wildlife and human development.

The study, “Extraordinary Biomass-Burning Episode and Impact Winter Triggered by the Younger Dryas Cosmic Impact ~12,800 Years Ago”, was divided into two parts, Part 1. Ice Cores and Glaciers and Part 2. Lake, Marine, and Terrestrial Sediments. Both parts have just been published in The Journal of Geography in February 2018.

The research was conducted by a team of 24 scientists, from multiple universities, institutes and authorities, led by Wendy S. Wolback, a Professor of inorganic chemistry, geochemistry and analytical chemistry.

The team combined data from ice cores, forest pollen and other geochemical and isotopic markers from more than 170 different sites across the world. This data indicated that a comet measuring more than 100 km (62 miles) in diameter disintegrated in our upper atmosphere, raining fragments down on the Earth’s surface.

According to their research, cosmic dust and smoke from massive wildfires was enough to block out the sunlight and cool the Earth. Due to the rapid return of glacial conditions plants began to die, food sources dwindled and ocean levels dropped as ice sheets began to advance again.

The short return to Ice Age conditions lasted about another thousand years before the climate began to warm again, allowing life to recover. It was too late for some life and fewer animals survived. Large life was particularly affected and many bigger species disappeared.

Their cosmic-impact hypothesis is based on considerable evidence that the Earth collided with a massive comet 100 km or more in diameter. Other comets measured so far have a typical density of about 0.6 g/cm3, less than the density of water. Using this figure we can calculate that a 100 km diameter comet would have a mass of 3.14 x 1014 tonne.

I’ve calculated previously that the Earth’s mass increase, based on the Expanding Earth theory, is about 1.7 x 1013 tonne per year averaged over the last several tens of millions of years. Thus this sudden mass increase from one comet is equivalent to the mass increase required for about 18.5 years of Earth expansion.

If you’ve read my book, Dinosaurs and the Expanding Earth, you will know that I’ve already suggested massive comets like these have added to the mass of the Earth over geological time. In chapter 5 of my book I described how the Earth’s mass could be increasing by the continuing, but somewhat intermittent bombardment of cosmic asteroids, comets, meteorites and cosmic dust. There are “cosmic showers” and “cosmic storms” adding vast amounts of new mass to the Earth over geological time. These repeated additions of cosmic dust, comets and meteorites have caused the Earth to increase its size, mass and surface gravity – an Increasing Mass Expanding Earth.

I also explored how the cosmic dust would tend to blot out the Sun and cause Ice Ages and mass extinctions.

Some people have argued that there is no mechanism that could possibly add huge amounts of new matter to the Earth, yet this new scientific study shows how one comet delivered enough new mass to the expanding Earth to account for about 18.5 years of expansion.

There are currently about half a dozen theories hypothesising what caused the Earth’s mass increase. These could all act together in causing the Earth to expand, so cosmic accretion may only be one small part of the total mass increase, or we may simply not realize how major cosmic accretion was in recent geological periods.

In the 2011 third edition of my book I was able to mention other authors who had similar thoughts about comets. Clube and Napier wrote two books, The Cosmic Serpent and The Cosmic Winter, which both argue that rains of cosmic material have regularly visited the Earth from time to time. One more recent book, by the popular writer Graham Hancock, was too late to be mentioned in my own book, since his book was only published in 2015. This recent book, Magicians of the Gods, suggests that his alternative archaeology indicates a relatively advanced civilization flourished during the last Ice Age, but was then destroyed when a giant comet broke into multiple fragments near the end of the last Ice Age 12,800 years ago. He also suggests there was a second series of impacts about 11,600 years ago.

I also explained in my book how these comets are regularly added to our solar system as it passes through the local interstellar medium. Look at the diagram below provided by NASA. It shows how our Sun (and the Earth and planets) are moving in one direction while the local clouds of interstellar dust are all moving in different directions. Fortunately for us we are now in a relatively empty region of space. Certainly more empty than the last few tens of millions of years.

These ideas are all related of course. Nature isn’t neatly separated into the separate science of astronomy, archaeology and geology, only we try to do that. But I believe this scientific evidence of a massive comet tells us a lot about how the Earth formed, moving the continents, producing volcanoes with isolated subduction, and why the dinosaurs and other prehistoric creatures tended to be gigantic. It is all related.

A Brief History of the Expanding Earth theory

An index of Interesting Publications

Universe today: Earth Was Struck by a Disintegrating Comet

Magicians of the Gods  Amazon UK 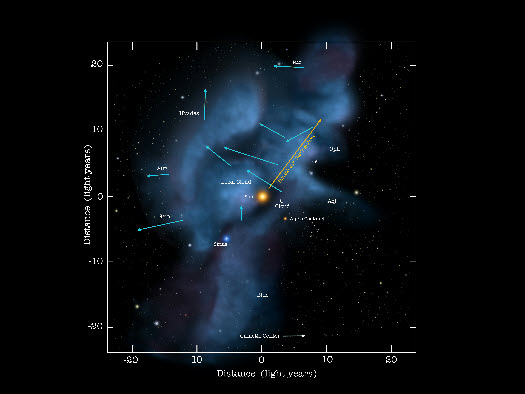