It was a great pleasure to see Dr James Maxlow, the Australia geologist, awarded a Lifetime Achievement Award (2017) by the John Chappell Natural Philosophy Society (CNPS) earlier this year.

The Lifetime Achievement Award (2017) was bestowed on Maxlow for his work in geology, principally in developing Expansion Tectonics, including the generation of expansion models, in his lifetime pursuit of scientific truth.

Professor Samuel Warren Carey, from the University of Tasmania, recognised the potential of Maxlow’s research and “passed on his Expanding Earth baton” to him

Of course good scientists strive to avoid the effects of cognitive dissociation and actively challenge old outdated ideas. Within the last year we have seen articles about expansion appear in the science journals of the Geological Society of London, Geoscience Research, Journal of Applied Geology, and Geophysics and Geosciences Research. The Australian Institute of Geoscientists published an article about Earth expansion, written by Maxlow, towards the end of 2016. In fact a review of 2016 indicates it was a very active year for scientific discussions about the evidence in support of Earth expansion.

The predictably of expansion tectonics

The mystery of obscure migration routes

The concept of Gondwanaland and Pangaea

Was there an ancient ocean between India and Asia?

A Brief History of the Expanding Earth theory

An index of Interesting Publications

The award was presented by CNPS President David de Hilster towards the end of the CNPS 2017 conference, held at the University of British Columbia in Vancouver, Canada. The Expanding Earth Section included two presentations. John Eichler discussed, A New Mechanism for Matter Increase within the Earth, while Maxlow presented, The Geological Evidence for Expansion Tectonics.

CNPS 2017 was considered a great success and they already have plans for 2018. As well as holding annual gatherings, like the one where Maxlow received his Lifetime Achievement Award, they have also set-up weekly video conferences to allow members to discuss their cutting edge research amongst their 1000+ members world-wide. Members can also add articles to the CNPS website for further discussion. CNPS continues to grow and welcomes new members.

Maxlow worked for many years as a mining and exploration geologist throughout much of Australia. Professor Samuel Warren Carey, from the University of Tasmania, recognised the potential of Maxlow’s research and “passed on his Expanding Earth baton” to him. In 2002 he returned to Curtin University to gain a PhD for his research into Expansion Tectonics. He has written numerous articles and two books about Earth expansion and a number of his presentations are freely available.

A typical paper written by Maxlow, Modelling Modern Global Geodata on an Ancient Earth, highlights some of the key points about Expansion Tectonics. It is highly “progressive, predictive and evolutionary.”

Maxlow’s work is clearly at the leading edge of a major scientific revolution. Its effects are so astonishing that some people simply refuse to believe it. Psychologists have identified this unreasoning disbelief: it’s called Cognitive Dissociation.

Cognitive dissociation is nothing new in science. Nearly every major scientific revolution has suffered its effect.

There are several key ways in which people attempt to overcome, or eliminate, the cognitive dissociation produced by revolutionary new scientific concepts. The most important way people deal with any evidence is to ignore it, refuse to accept it, or simply avoid that new information in general. As I’ve discussed previously, we can see all these classic signs on the Wikipedia website. Cognitive dissociation became so extreme there was even a “call to arms” to ignore or eliminate the cognitive dissociations. They gradually removed the evidence indicating Earth expansion so they were able to continue with their belief in a non-expanding Earth.

References to key present-day expansionists are removed so they can pretend it is an old idea instead of a new scientific revolution happening now. Maxlow is one of their key targets. The cognitive dissociation of the Wikipedia editors is so extreme that they can’t even bear to mention any of Maxlow’s books, articles or presentations.

Fortunately there are an increasing number of people who want to be accurately informed about the scientific evidence for Earth expansion. This can clearly be seen in sales of Maxlow’s books. In his home country of Australia, Maxlow’s first book, Terra Non Firma Earth, became a No 1 Best Seller in Amazon’s Geophysics section, while his other book, On the Origin of Continents and Oceans, was in the top ten. 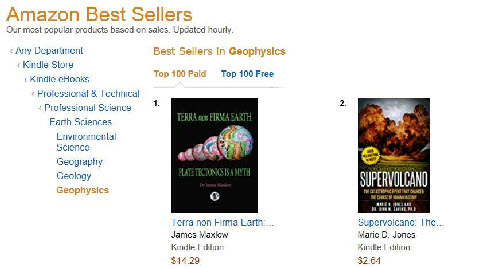